JeeYoung Lee has a lot of imagination.
She transforms her tiny room into a magical space with only a few colours, paper and bits that she founds.
For weeks, sometimes months, she creates the fabric of a universe born from her mind within the confines of her 3 x 6 m studio. All this, just for a single photograph, but aren’t they wonderful?. She does so with infinite patience, in order to exclude any ulterior photographic alteration.

Graduate of Hongik University in Seoul and recipient of the Sovereign Art Prize in 2012, Lee opens her first European exhibition at Opiom Gallery in Opio, France titled Stage of Mind starting February 7, 2014. 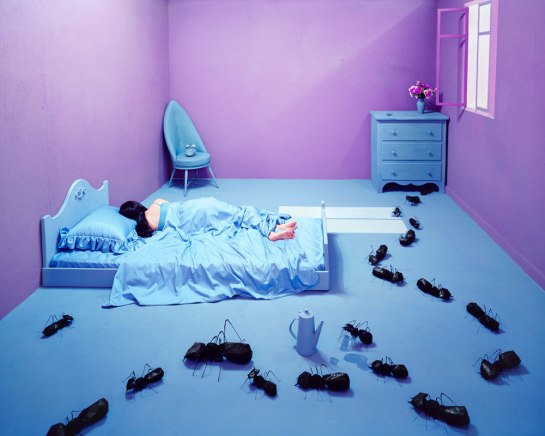 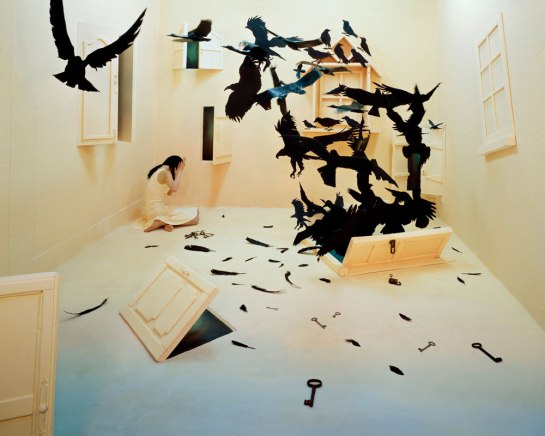 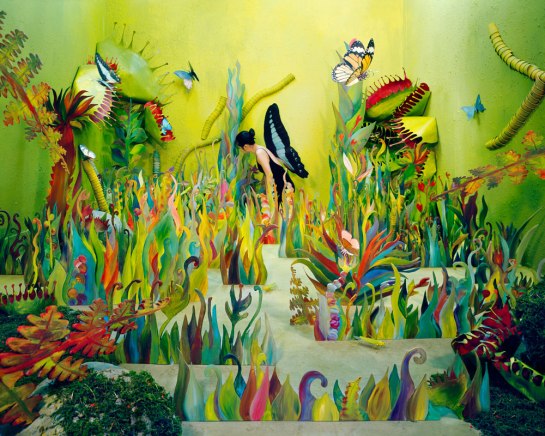 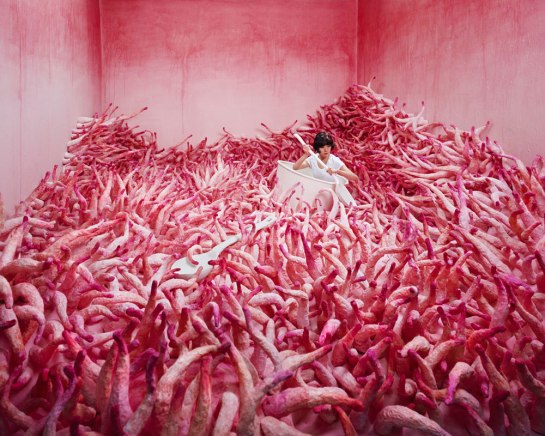 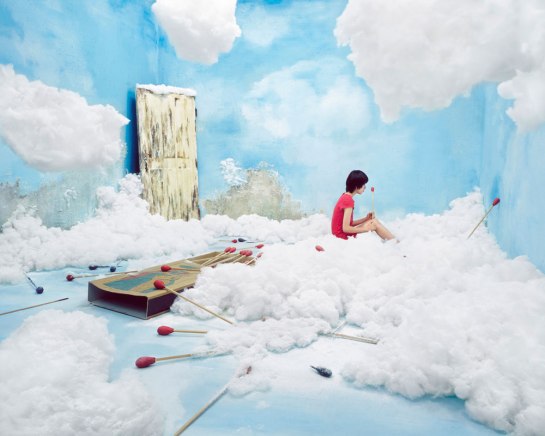 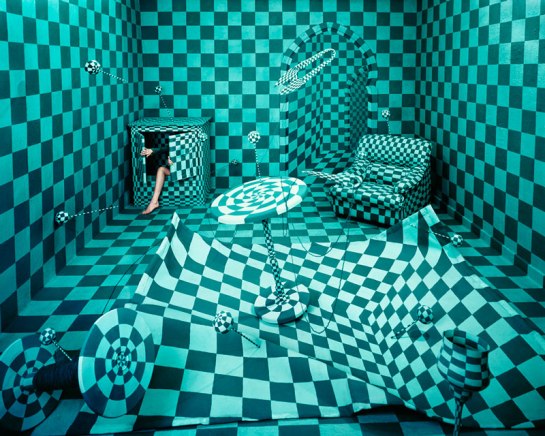 “As a kid I thought I was pretty strange. I always found myself drawing letter forms throughout middle school and high school. My homework was littered with typographic illustrations. The artistic friends I had all seemed to draw cartoons, or paint still life, but for some odd reason I was drawn to letters. I just really enjoyed hand lettering.”

“In general, most people see words and read sentences to derive meaning. I saw letters as beautiful as shapes and curves with forms full of beauty. It wasn’t until years later that I discovered that I had a love for what was known as “typography”. What a feeling of relief and excitement all at once! I discovered that not only was… 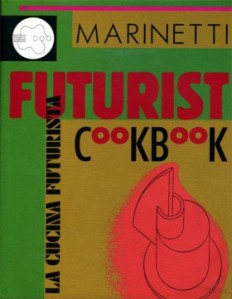 I was reading a really interesting article the other day about Filippo Marinetti, the leader of the Futurist movement group in Italy, 1930. I didn’t know about this and maybe you don’t either. He was not only an eccentric designer with a lot of amazing ideas, but he also thought that he had to improve the Italian cuisine at that time. His aim was to make food into an extremely interesting experience of colours, flavours and sensations. He wrote the Manifesto of Futurist Cooking, where he made some bold suggestions, such as:

– No more pasta, as it causes lassitude, pessimism and lack of passion. Marinetti wanted to prepare the Italians for war, as he was a Fascist. “Spaghetti is no food for fighters,” he declared.
– Perfect meals requiring originality and harmony in table setting, including all implements, food aesthetics and tastes, and absolute originality in the food
– Sculpted foods, including meats whose main appeal is to the eye and imagination
– Abolition of the knife and fork
– Some food on the table would not be eaten, but only experienced by the eyes and nose
– The diners would eat in a mock aircraft, whose engines’ vibrations would stimulate the appetite. The tilted seats and tables would “shake out” the diners’ pre-conceived notions, while their taste buds would be overwhelmed by highly original dishes listed on aluminium cards.
– Traditional kitchen equipment would be replaced by scientific equipment, bringing modernity and science to the kitchen.

They have the most strange dishes with weird combinations like mortadella with nougat or pineapples with sardines. Marinetti wanted Italians to stop eating foreign food and to stop using foreign food words.

One Futurist dessert, called Italian Breasts in the Sunshine, features almond paste topped with a strawberry, then sprinkled with fresh black pepper. This is one of the few palatable dishes in Marinetti’s Futurist Cookbook.

Another exotic idea was the Tactile Dinner. As the guests arrive, each puts on a pair of pajamas. Once all have arrived and are dressed in pajamas, they are taken to an unlit, empty room. Without being able to see, each guest chooses a dinner partner according to their tactile impression.

The illustrator Mary Kuper is doing an exhibition of her amazing and gorgeous illustrations in the Saison Poetry Library, Royal Festival Hall, from September 18th to October 26th.
The exhibition is called “Barnacles & Dames” and it is about etymologies, poetry and images. 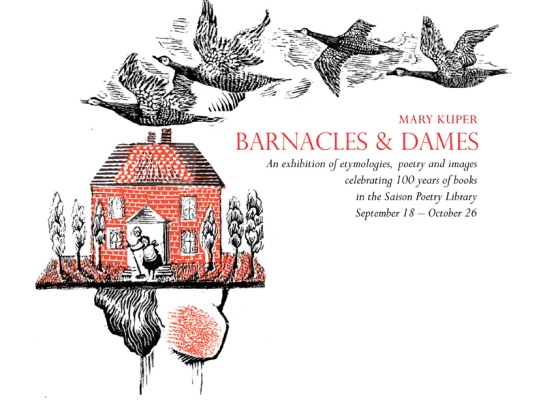 Josh Ritter, an american singer and songwriter decided to do his new video using photos from over 12.000 pieces of cut paper to animate this beautiful song, “Love Is Making Its Way Back Home”
More than 20 artists, director, editor and production assistants made this happen.
After doing digital images, they convert them in paper cutouts. The process continues photographing those 12.000 pieces and the editing together into a stop motion video of 4 minutes.

The video premiered on Etsy, the online community of talented craftsmen.
Ritter and his team opened a shop there as well. The artists behind the video have created a limited run of screenprinted posters based on a selection of frames. Each poster will include one of the die-cut construction paper cut-outs, as well as an mp3 of “Love Is Making Its Way Back Home.”

Josh Ritter – Love Is Making Its Way Back Home from Josh Ritter on Vimeo.

I´m not sure that something extraordinary or cosmic will happen today. I really don´t think so. I´m more a factual person.
I just think, as a graphic designer, I like how the date looks in all the adverts, shows, events that are happening today. It seems that this happens once every 10 years.
A lot of people will marry today I´m sure, to put this interesting figure in their cards. People will bet the 11 in the lottery (as millions more, sorry mate chances of winning today are not good)
People will pray at 11:11 or do a minute or silence, or simply, they won´t do anything different that they would do everyday.
In either case, its nice to have this feeling or hope that something unusual can happen though, right?