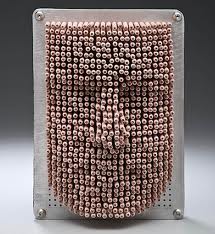 Julian Voss-Andreae has a Masters in quantum physics from the University of Vienna, and is now participating in a seminal experiment demonstrating quantum behavior for buckminsterfullerenes. I just read this back and my mind begins to bend. But, as with many science ideas I can’t understand, (maybe you can, I don’t) he found an amazing way to translate quantum physics into art.

These magnificent artworks from his last exhibition called “Quantum Objects” are a way to at least try to understand the behaviour of molecules such as protein chains, and subatomic scenes.

My favourite is Quantum Man, this fragile piece plays with our sense of perception. If you look at it one way you can see that it is a solid sculpture but if you walk round it, it is almost invisible, it is desintegrating. Breathtaking.

He has a series of artworks that show the effect of how ephemeral we are, that we are actually a bunch of cells and particles held together basically.

I think that this proves how much science is advancing in terms that are not easy to understand. But I think that Voss-Andrae found a good way to represent the unrepresentable.